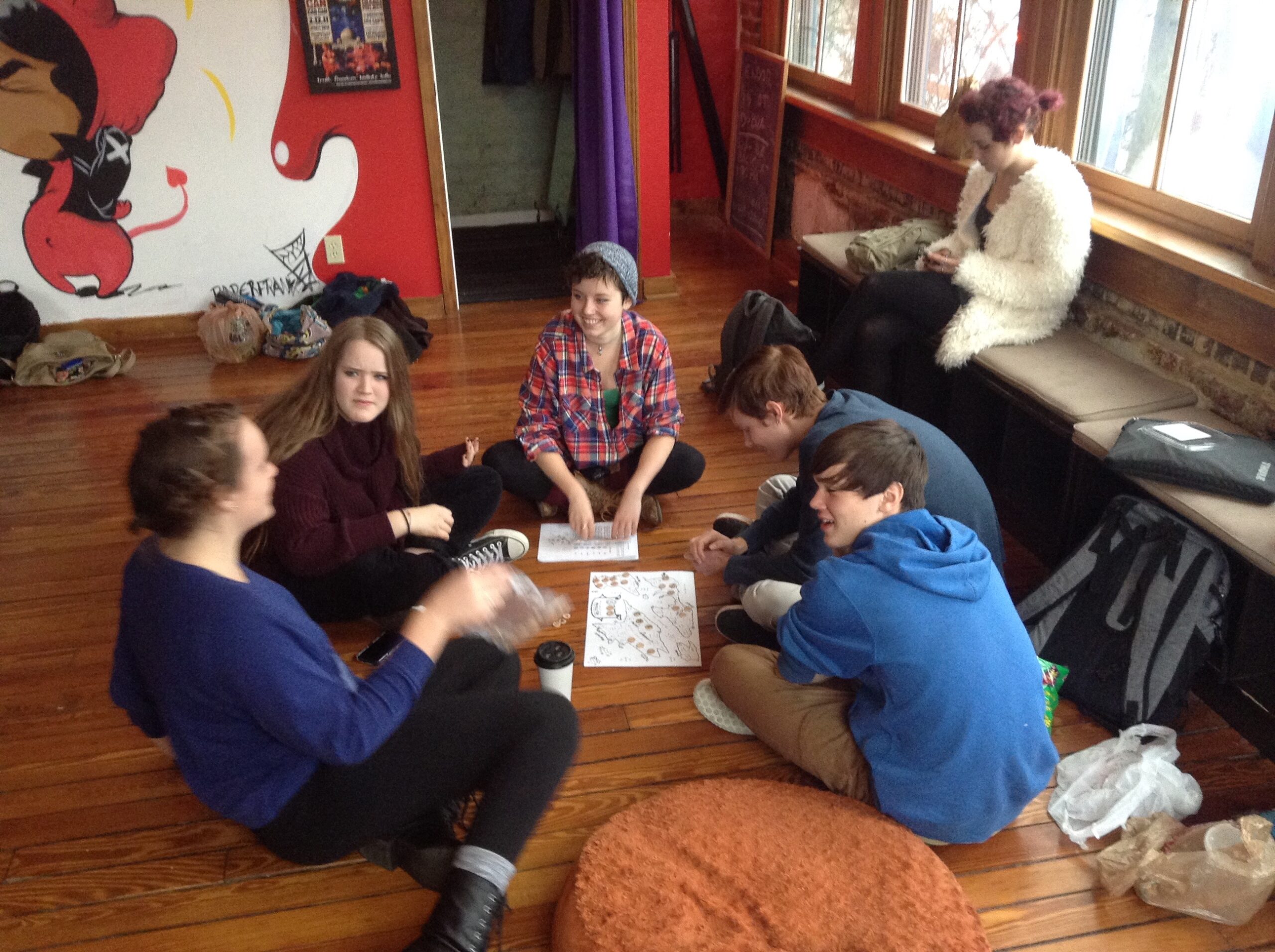 Endor ALC was a community and resource center for self-directed learners aged 14-18 in Asheville, North Carolina.
It was open from fall 2013 to spring 2017. A member of the Agile Learning Centers network, Endor used (and remixed) tools and practices from agile management to enable students to reach their goals and co-create the culture of the organization.

Endor’s “curriculum”, for lack of a better term, was based in supporting self-directed learning. We put a higher value on building the skills involved in pursuing interests than on learning specific content. This was facilitated using (and remixing) a range of tools developed by the Agile Learning Centers network.

Without any initial funding, Endor started in a minimal viable product form in 2013, meeting in Mojo Coworking and venturing out to public meeting places for workshops and discussions.

In 2015, Endor moved across town to be a part of Open Space AVL, a community/project space shared with the Asheville Maker Space and AVL Tool Library.  At its height, Endor had a total of 22 students and four facilitators.

I used to blog about our goings on at least once a week. You can find that old blog here and the old homepage here.

In 2015 Endor ran an Indiegogo campaign, raising $3,000 for facilitator training, computers, and other tools.
You can see the campaign page here and watch the cutely pathetic campaign video below.

I’ve been sitting on this domain for a couple years and today I’ve finally done something with it.

MCI Mail was the first publicly available email provider. Starting in 1983, anyone with a computer, an internet connection, and $35 could purchase a “mailbox”1 for sending and receiving Email. MCI also had a service where they would print out digital letters and send a paper copy to a specified physical address.

This feature is pretty cool. Because email wasn’t widely used at that point, they designed a feature that integrated into the much more widely used communication system: paper mail. That’s like if early phone companies offered a service that sent phone owners’ non-phone owning relatives a person to gossip on their behalf.

Recent attempts at this type of inter-media patching seem to have failed. Email notifications of facebook tags, slack messages etc. They largely don’t translate into another medium, they just tell you in one medium to go look at another medium to receive a message. Maybe the recent antitrust cases against facebook (and others) will lead to some cross-platform communication.

Back to MCI Mail.

You haven’t been able to get a _____@MCImail.com account since 2003, but I’ve gotten ahold of the domain MCImails.com (note the plural) and I’m now receiving mail at the address seen above.

I got the domain thinking I’d be communicating with old time telecommunication nerds who would spot the domain and smile while they wrote me back from their side of the screen, but I have no idea where I got that idea. I doubt I know more than 3 people who would even get the reference, and none of them have the time to look at the word written between the @ and the .com.

But if you’re reading this, you know. And now you can smile and email me.

The coolest place in Billund to have your photo taken is in the Duplo pool at LEGO House.

When LEGO Papert Fellow Stefania Druga from the MIT Media Lab came to the Studio for a weeklong residency, we went for a visit at LEGO House and took full advantage of the photo ops.

And then the Media Lab used one of the photos in their weekly newsletter.

Building up for future photography career.

Stay tuned for more on the LEGO Papert Fellowships. 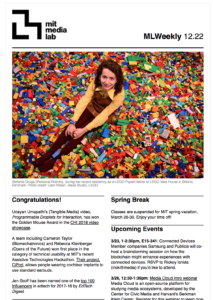 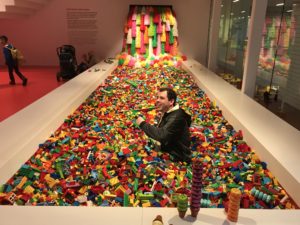 Originally published over at Medium on 28 March 2017

Six years ago I had this arty idea. I saw this three-point eternal loop of an art project that is so tacky that it’s actually kind of funny. Which in turn makes it cool – funny is cool. But that then makes it tacky, because anything too cool is tacky. And that makes it funny – etc. Ad infinitum.

There are many places to go with this idea, but the funnest idea was to print all of these posters of my face and post them up around town, essentially advertising myself; skipping the step of doing anything of worth and going straight to local celebrity.

I talked about this idea for years. And the concept evolved; to include a photo series of places the posters were posted, to include t-shirts, to possibly star a subject/model other than myself, and to include an essay explaining the whole idea so spectators wouldn’t have to wonder if I was an extreme narcissist or if this was some really clever art project.

Really it’s both of those things. It’s a joke — look at that fun banner image again from the top of this page.

This reminds me, I’ve really been meaning to pick up Susan Sontag’s Notes on Camp and I suspect that once I do I’ll find that this isn’t really all that original.

After playing with this idea for years, t-shirts simmered to the top of the pot as the perfect medium for this project because of the specific history of t-shirts with people’s faces on them. In the 1970s Lonely Ladies in San Francisco printed shirts with rockstars’ faces on them, then the New Yorker in New York produced shirts with famous authors and composers from throughout the ages, then lots of other people ripped off the idea. A face on a shirt is no longer content, it is form.

Aside from everything else that holds everyone back from doing anything, setting stopped me from bringing this project to life. The concept would work best in a small town with a relatively large modern art community, a place where the subject didn’t stand too much to lose and did stand to gain. It hit me recently that that’s exactly where I am. Sunny little Asheville, North Carolina.

So I picked a portrait (photo cred. Noah van Heukelom, 2013), converted it to halftone, and sent it over to Timm at the silkscreen shop. I went to the bulk-bins and bought plain t-shirts by the pound and piled them on my little bike trailer.

I took the shirts home and started printing. I got pretty high off the experience of printing these shirts – humoring your own ego to such a degree is. . . interesting. It felt amazing. I imagine it’s like seeing your name on the marquee at Carnegie Hall. The smaller auditorium. Except this experience was entirely engineered by myself at home.

When some of my housemates got home it just kept going; they thought it was hilarious and in turn I felt even better. Laura even insisted on hanging one of the draft prints in the kitchen above my door – building up the experience even higher.

I printed more shirts and distributed them at thrift stores around town with the help of some friends. Believe it or not I was too self-conscious to drop the shirts off myself, so Rochelle & Drew helped me drop them off.

The goal here was to one day spot someone on the street wearing the shirt, nod, smile, and feel complete. [UPDATE: Still not spotted any]

The next step was to start writing this essay and I got about this far. Then Tuesday, November 8th, 2016 came around and it felt like nothing would ever be funny again. The whole project suddenly felt completely pointless and kind of insulting to everyone in the world. How can you feel good about running a campaign of shameless and amusing self promotion when the rise of modern fascism emerged from that very same thing? I couldn’t answer that question so the project went on ice. The shirts just sat there.

A week went by and Pussy Riot came to town for a panel. Neighbor Emma and I covered it for the AshevilleFM Newshour. Pussy Riot spoke and went through slides of actions they and their friends had done. After they sold some t-shirts we sat down with Sasha, Masha, and Sasha in the greenroom to eat snacks and continue the conversation (you can listen to that here).

I was totally starstruck and inspired – to do anything. They painted this picture of art and activism in Russia that doesn’t exist in the same way here in the states. American “activist” art bares this stigma that it’s kitschy and that it goes stale very quickly, and “fine art” is a valueless commodity traded by the very rich.

Pussy Riot’s work goes beyond all of that. They’re artists yet their biggest focus these days is zona.media, an outlet covering Russian politics and court proceedings that no one else in the country will cover.

Thinking this over brought me back to this here project. The rise of fascism isn’t a reason not to do funny art projects, at least if the reason behind it is to make someone happy and build a persona that can advocate good stuff later on.

There’s a privilege component to parse out, too. But as far as I can see I’m not taking anything except attention away from anyone else, so I’ve gone ahead with it. I’d appreciate feedback on this, though.

What makes me and my modest Scandinavian sensibilities* ok about this whole project is the fact that this is actually self-deprecating. Being egotistical and boastful is bad, so acting on ego intentionally is self-deprecating.

*(see Janteloven: a cultural norm that enforces modesty and humility; no one is more special than anyone else).

By putting myself up I put myself beneath you.

You, dear reader, are above me. Because you haven’t printed your face on t-shirts and cast them out in the world. And you can stay above me by wearing one of these shirts, available now for just $10.